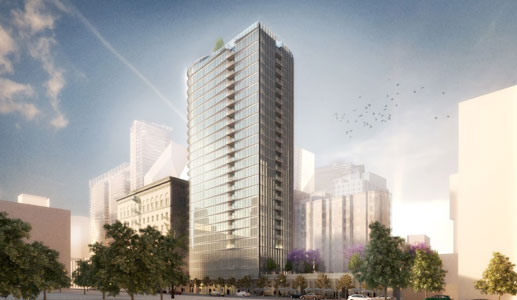 The developer will bring plans for the tower at 949 South Hope Street to the Downtown Los Angeles Neighborhood Council’s Planning and Use Committee in January, according to Curbed. The project calls for 236 market-rate units, although it’s not clear if those units will be rentals or condos.

The tower would sit above a 17-foot podium that is topped with amenities space, while also including street-level retail and restaurant space. Amenities include a swimming pool, spa, fitness center, barbecue area and a roofdeck. The architect is Solomon Cordwell Buenz.

The site is a stone’s throw from CIM Group’s 34-story residential tower at 888 South Hope Street, which the developer plans to open in 2018. CIM Group said in September that it had spent $800 million on seven projects in South Park.

Developers are bullish on South Park. Trumark Urban has sold units for as much as $4 million at its Ten50 tower just a few blocks from Forest City’s proposed tower. City Century tweaked plans for its three-tower Olympia development to include a 1,000-key hotel in October. [Curbed] — Dennis Lynch