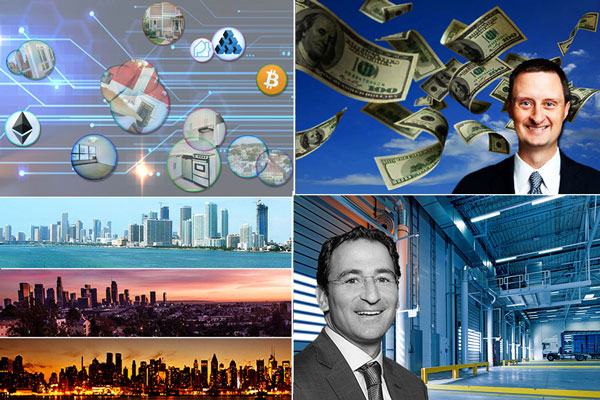 From TRD New York: The real estate cryptocurrencies you can buy right now (or soon)

Don’t get bummed about Bitcoin’s bubble. Buck up and buy another cryptocurrency … if you dare. TRD researched the alternative currencies on the web to deliver an assessment of the real estate-specific cryptocurrencies that are available today, from PRO to ATL to RC tokens. [TRD]

The country overall saw a 6.5 percent, or $2 trillion, increase in home values this year, according to a report by Zillow. It’s the largest year-over-year increase since 2013, with all U.S. housing stock currently valued at a cumulative $31.8 trillion. Los Angeles, New York, Washington D.C. and Miami were the most valuable American housing markets of 2017, with L.A. scoring the top valuation of $2.7 trillion and New York trailing with $2.6 trillion, Bloomberg reported. [TRD]

Between January and December of 2017, returns for industrial real estate investment trusts came in at about 24 percent, the Wall Street Journal reported. Real estate research firm Green Street Advisors found that other sectors like hotel, multifamily and office saw returns in the single digits over that same time. Industrial will continue to be in high demand in the year ahead. The Blackstone Group leads the way with its $1.8 billion dollar purchase of a 22-million-square-foot industrial portfolio. [TRD]

Why tax reform could kill the jumbo mortgage market

Jumbo mortgages — those generally above $424,100 — have been increasingly popular, with that portion of the loan market seeing its biggest dollar volume since 2006 just last year, according to the Wall Street Journal. But since the new Republican tax plan reduces the size of loans eligible for mortgage-interest deduction and also limits the property taxes that can be deducted from a homeowner’s tax bill, some experts believe that wealthy buyers will hesitate to opt for the second or third home that would draw such loans. First Republic Bank’s CFO Michael Roffler, though, said at a conference in early November that he doesn’t think the new tax plan “totally stops the business and drives things to a halt.” [TRD]

Office-space glut could hit in 2018: Moody’s

With the rate of office inventory growth expected to double in 2018, and the amount of office tenancy growth expected to be about half of what it was in 2017, Moody’s predicts difficulty ahead for the U.S. office market. Lenders may be underwriting buildings with values that exceed those seen before the last financial crisis, experts told the Wall Street Journal. “Typical of the late stage of a cycle, we see some pretty aggressive underwriting with high expectations of future rent growth, and very low vacancy assumptions,” Moody’s vice president Kevin Fagan said. [TRD]

Risky mortgage-backed securities may have fueled the last financial crisis, but that’s not stopping investors today, who, according to a new report from Bloomberg, are going for “credit risk transfer” residential mortgage-backed securities, or investing in mortgage debt from homeowners and betting they won’t default. Those types of housing bonds pulled in returns of over 10 percent in December, according to data from Bank of America. Morgan Stanley analysts are calling these bonds “the place to be” in 2018, Bloomberg reported. [TRD]

It’s been a tough year for retail across the country, but three leasing deals north of $10 million were still notched in Gotham over the last 12 months. TRD’s ranking of the priciest retail leases in New York City found Times Square drawing the high-dollar deals, with retailers like Levi’s, Sephora and CVS signing up to open up shop in the area. [TRD]

When it comes to real estate-related legal disputes, it can’t get any uglier than it does in land of beautiful people. An alleged Ponzi schemes, claims of cocaine-filled cars and CoStar’s brutal takedown of Xceligent all factored into a dramatic year for L.A.’s court system. Check out TRD’s list of the eight most notable cases. [TRD]

With drama surrounding allegedly shady brokers, fake buyers and developers forging ahead with secret backers, South Florida’s 2017 was as rich in intrigue as it was with unsold luxury condos. Check out TRD’s rundown of the stories that got the industry talking this year. [TRD]