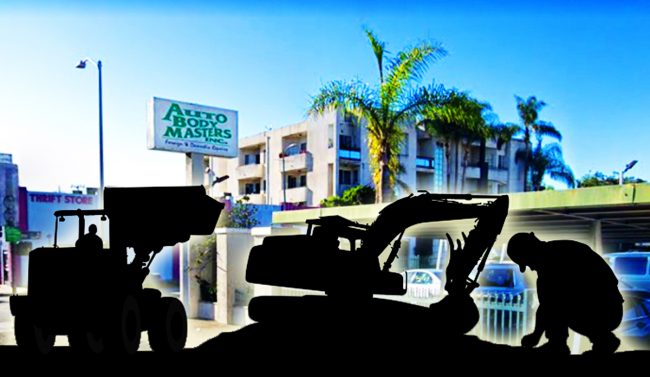 A developer has proposed a 108-unit mixed-use project in place of this auto shop in Culver City. (Credit: iStock, Google Maps)

Plans were filed today with the city of Los Angeles for a new mixed-use project with 108 residential units in Culver City.

The building, which would be constructed at the site of an auto body shop at 10375 W. Washington Blvd. near Palms, would have 3,600 square feet of commercial space and 11 units set aside as affordable housing.

The application did not include the name of the applicant or owner. Calls to city planning staff were not returned.

The applicants are seeking a density bonus though the city’s Transit Oriented Communities (TOC) program. Through the program, incentives are granted to developers who incorporate affordable housing and are within a half-mile of a major transit station. The site is near several bus stops, but it’s one mile from a Metro Expo Line station.

Culver City’s thriving tech and office sectors have spurred multifamily investment nearby. Earlier this year, David Newman announced an 80-unit project on the edge of Palms, replacing a car wash on a half-acre site he bought for $6.7 million in 2015. That project also will utilize a 60-percent density bonus through the TOC program.

At 3664-3688 Overland Avenue, a group related to Oakmont Capital is planning a 187-unit project, and is also taking advantage of TOC bonuses. Also in Palms, a seven-story mixed-use building with 409 units is in the works.