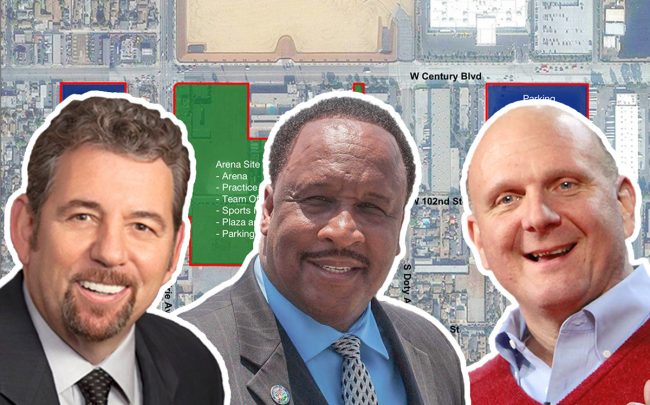 From left: James Dolan, Steve Ballmer, and James Butts with a map of the proposed site

Representatives for the City and the Los Angeles Clippers privately expressed concern almost three years ago that Madison Square Garden Company would learn about the team’s plans for a new NBA arena in Inglewood.

As early as April 2016, both parties worried whether MSG would find out about the arena before the New York-based company agreed to surrender the parking lease, the Los Angeles Times reported, citing documents recently made public by Los Angeles County Superior Court.

MSG doesn’t want a competing arena about a mile from the Forum Arena, after recently investing $100 million to renovate it for concerts and other performances. The company is concerned the Clippers’ arena near Century Boulevard could also be used for such events.

The project, which is subject of another lawsuit, also calls for a practice facility, office space, a sports medicine clinic, retail space, and a hotel.

L.A. Clippers owner Steve Ballmer is planning to build the Inglewood Basketball and Entertainment Center across from the L.A. Rams’ stadium development. Some of the land had been leased to MSG for the Forum, but the company terminated that lease in 2017.

MSG is suing the city, claiming Mayor James Butts tricked them into forfeiting the lease to make room an office park development, not a competing arena. The mayor has denied the allegations. In a court deposition in August, he said he originally told the Clippers that Inglewood did not have any sites available for an arena.

The Clippers’ lease at Staples Center, about 11 miles from the proposed new arena, expires in 2024, when the team expects to move to Inglewood. [LAT] – Gregory Cornfield