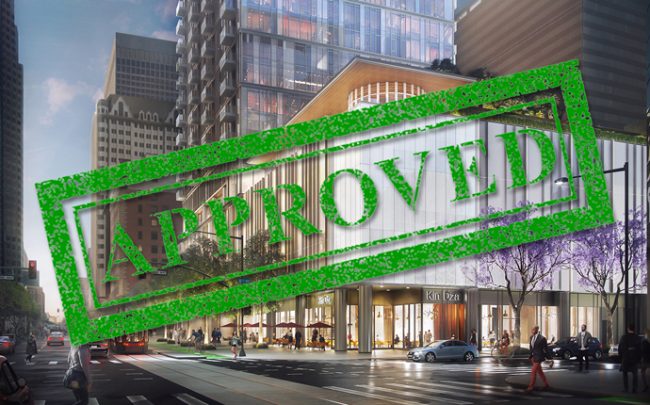 A rendering of Fig and 8th

The Council voted on Friday to deny an appeal of the aptly named “Fig and 8th” project and to approve a transfer of air rights from the L.A. Convention Center needed for the development.

MFA is a subsidiary of Japanese developer Mitsui Fudosan and proposed Fig and 8th in early 2017.

The Johnson Fain-designed tower is set to replace a parking lot at 744 S. Figueroa Street, across the street from Brookfield Properties’ Figat7th mall. The site is a few blocks north of the convention center area, where developers are building a slew of high-rise projects.

Greenland USA’s Metropolis complex was one of the first large projects to break ground in the area. Its now building the last tower of the four-tower development.

The Circa development opened in the fall. And City Century has its own $1 billion project in the works nearby.

The approval for Fig and 8th was all but secured earlier this month when the City Council’s Planning and Land Use Committee voted to deny an appeal and move the project forward.

Fig and 8th will contain 7,500 square feet of commercial space and 438 rental units. It’ll feature 80 studios and 94 two-bedrooms and the remainder of the units will be one-bedroom apartments. MFA will reserve 22 units for low-income renters.

In all, the 41-story tower is planned as 425,000 square feet. MFA initially wanted the tower to be 57,000 square feet larger, but scaled it back. The latest configuration surfaced in an environmental review the city published on the project last fall. MFA is looking to complete construction in 2022.

It’s the first of two projects MFA is working on Downtown. While the environmental review process saw Fig and 8th shrink, MFA expanded its project at 754 S. Hope Street during environmental review. Five additional stories were tacked on for a total of 45 and nearly 140 units added for a total of 547. MFA also redrew its plans to include stepbacks and landscaped terraces.