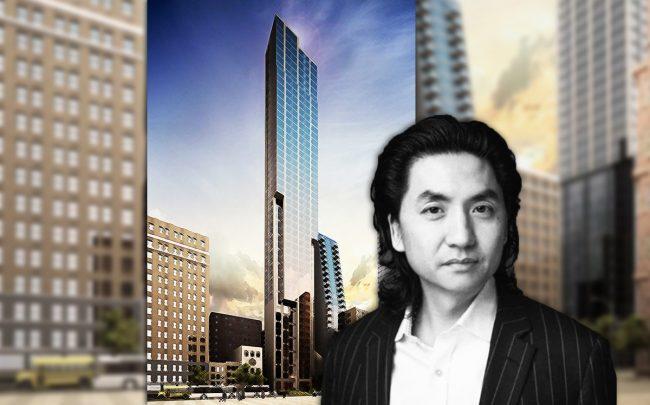 A rendering of the tower at 141 East 47th Street and Bentley Zhao (Credit: LinkedIn)

What’s more, the suit claimed, the “malicious” nature of Town’s accusations had “damaged the plaintiff’s business reputation,” impairing its ability to obtain financing and market projects, and causing New Empire to lose profits.

Town sued entities tied to the Sunset Park-based development firm earlier this month, claiming it failed to pay a $210,000 consulting fee and a $2.2 million termination fee — both related to work on a planned condominium at 137 East 47th Street.

The July 19 suit alleged the developer refused to pay up after suspending a 2016 sales exclusive with Town at the Turtle Bay condo project. It also claimed the developer transferred the property from one limited liability company to another, rendering the first — with which Town had an agreement — insolvent.

In a statement, New Empire said Town’s lawsuit had “tarnished” its reputation when, in fact, it has proven to be a “more than capable” developer over the years. It currently has $1 billion worth of real estate projects in the pipeline, including several hundred million dollars worth that is shovel ready.

“We are confident that we will prevail as the facts will be uncovered and the timeline will prove,” said Anthony Santiago, chief operating officer.

A spokesperson for Town said the firm had “no knowledge or understanding where the lawsuit is coming from,” and only learned about the “outrageous claim” from a reporter.

In April, Town shut down its leasing and resales business and said it would primarily operate as a new development brokerage.