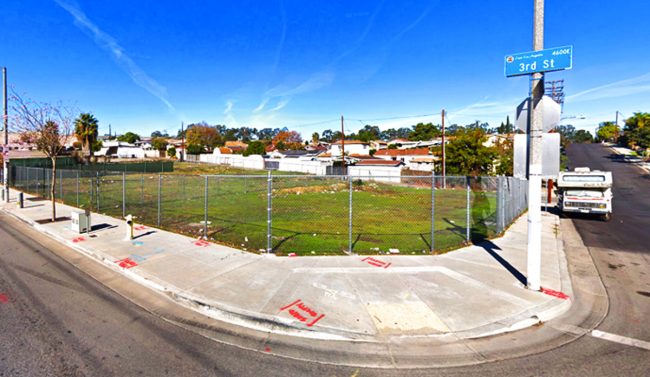 The proposed development site at 3rd Street and Dangler Avenue

Azure Development, Inc., is vying to secure an exclusive agreement with Los Angeles County this week to develop a 76-unit project in unincorporated East Los Angeles.

The Commerce-based firm and partner Romero Management Consultants want to combine County-owned properties with adjacent properties Romero owns at the corner of 3rd Street and Dangler Avenue, according to Urbanize. The lots appear to be vacant and underused.

The L.A. County Board of Supervisors on Tuesday will consider entering into an exclusive negotiating agreement with the firm.

The development would have studio, one, and two-bedroom units. Azure plans to make 50 of the 76 units affordable to households earning between 30 and 50 percent of the area’s median income. And they are planning an additional 17,000 square feet of ground-floor retail, restaurant, and medical office space. The project would include an outdoor plaza and parking for 212 vehicles, according to Urbanize.

The site is about halfway between the Metro’s Marravilla and East L.A. Civic Center stations serving the Gold Line, which runs to Union Station in Downtown. It’s unclear if Azure also seeks any density bonuses at the site, which is outside the city of L.A. and wouldn’t be eligible for bonuses through the city’s Transit-Oriented Communities program. That program has spurred developers to plan over 1,000 affordable units around the city.

Azure is planning a 44-unit project closer to the city in Boyle Heights that will include 35 affordable units. The developer is seeking a density bonus there.
[Urbanize] – Dennis Lynch